Read through the latest blog here....

As most of you know, I usually get my pups in the first week or two of the summer holidays. This is so I have at least 4 weeks to prepare them for the School re-opening in September. When they have settled at home I introduce them to the School, which is practically empty, the office where they will spend their days and the exercise area outside.  I start off with just an hour and gradually increase the time spent there. I save myself jobs to do in the holidays that I can do, when and if, I get chance, nothing that requires total concentration.  When School starts in September it is always a staggered start, with staff only the first day, then the new Year 7’s and 6th Form the second day, and the rest of the boys come in on the third day.

The puppy I should have had, last summer, failed his 6 week assessment, he was too nervous, so wasn’t suitable to be trained as a Guide Dog. This would have left us puppyless at School, which was too awful to contemplate. I was then offered Womble, who was 6 months old and had been returned by his puppy walker due to a change in family circumstances. He was in kennels at Atherton. Womble was a lovely dog but he did have problems which became apparent on our first day, refusing steps/stairs and a few days later refusing to enter a restaurant, which he did eventually with a lot of patient coaxing (and then wouldn’t leave the place!). We made so much progress in the first month or two, and really thought he stood a chance but then for no reason he started refusing certain flights of stairs again. He was totally unpredictable. He was assessed by Guide Dogs and withdrawn. We do have a very happy ending though, because he has gone to live in an ideal home in the beautiful countryside of North Wales, and we are able to keep in touch and visit him.

When I was told that I was able to have a new puppy at the beginning of the Christmas holiday I was delighted. I was told that he would be a black, pure Labrador, born on the 1st November to dam Jodi and sire Flynn, one of six pups in a ‘V’ litter. The chosen names for the dogs were Vince, Vinnie and Vargo and the bitches were Valda, Violet and Verdi. Vargo was the pup I was supposed to be having on the 22nd December. However, I then received a telephone call to say that although Vargo was definitely mine, I wouldn’t be able to have him till at least two weeks later as he hadn’t been well and was on medication. He also needed a small dental operation but couldn’t have that until he had completed his course of medicine. Well, this gave me quite a dilemma as I would have been back at School when the puppy arrived.  My Supervisor Sallie came to the rescue when I explained the problem that I had, and managed to secure another pup from the same litter for me, a little bitch called Verdi. Mark Wilson, a lovely puppy walker I know from Southport, was asked if he would like Vargo, he said yes, he didn’t mind waiting, so all round a happy ending.

Verdi’s start however was nothing like any of the others!  She arrived on the 22nd December at 7 weeks old and we had a very chaotic Christmas and New Year. We had various family members arriving for a few days and then departing, sometimes over-lapping, it was certainly not a peaceful holiday! Nothing bothered her; she took it all in her stride.

We came back to a full on start to the Spring term, with all the pupils in on the first day and me working full time! Verdi was a little SUPERSTAR, she didn’t bat an eyelid. We have had the very occasional accident in the office but that was my fault, I was either in the middle of a phone conversation or didn’t notice her at the gate, but those occurances were very rare. The House Office is quiet one minute, then inundated with boys and staff and very noisy, the next. No day is ever the same and emotions can run very high, if the puppies handle can handle this on a daily basis, they are pretty bomb proof when they leave!

My GD Supervisor came into School to meet Verdi during her third week, and arrived just as break-time was starting. We had to go against the flow of over 900 hungry, teenage boys heading for the dining room, to reach the House Office. My Supervisor, who has visited the School many times, (but not at feeding time,) said that she was going to tuck in behind me to walk down the corridor. It can be quite intimidating! However she was extremely impressed with the way Verdi threaded her way through all the legs, not a care in the world, in fact she actually seems to enjoy the challenge.

Verdi is also very comfortable with train travel, I think it helps that we have trains running past the exercise area at the back of the School. They become immune to sight and sound of them so it isn’t a frightening experience to be sat at a train station. She has been on a long car journey to Cambridgeshire, to stay with my brother for a few days, visiting lots of new places. She has been to a Brownie’s and then a Rainbow meeting while I was giving a talk and also been to visit a couple of Primary Schools too. She attends our full staff briefing in the mornings at School, the Faraday House Office meetings and our Pastoral conferences. She has also accompanied me to Social Services meetings.

We had a lovely surprise the week before half term, as we were asked if we would be able to have our Petal for a week while her owner was in hospital. Mr Whiteley, our Headmaster, agreed without hesitation and we had a wonderful week with her. She was the perfect house guest at home, and absolutely loved being back in School, where everyone was so pleased to see her. A very dear member of our Guide Dog Fundraising Committee, had passed away a short time before and his funeral was during this week. We had been told that it would have been his wish for us to attend with our dogs and puppies and we turned out in force. I was able to take both Petal and Verdi and they behaved perfectly! Ron would have been so pleased to see so many from Guide Dogs there.

I am sure that Verdi is going to have many more adventures in and out of School so watch this space for updates!

Verdi arrived, she was 7 weeks 2 days old. How cute is she?

Verdi‘s first visit to the vet. This was just an introduction.

I had a wonderful early Xmas present as Mr Gemmill, and his son Finn, had brought Captain in as a surprise for me. So I had big cuddles and little Verdi met Captain and his friend Brad.

Verdi sleeping with her ‘guard of honour’ my two cats Max and Leah, who are both twice her size. But not for long!!

Verdi - The first days at school

Verdi, on her first day in the office. Don’t be fooled by that little sad face, she certainly made herself at home very quickly and had everyone fussing over her.

Verdi loves her box of bones, these are mementos from all the other pups. The problem is that she gets them out one by one, and the office floor is covered in them. I spend quite a bit of time tidying up after her!!

Verdi does lunch duty with me on the top floor of the School. She enjoys watching the boys on the yard outside.

We had our lovely Petal to stay with us for a week and Verdi loved the company. Petal was very patient with those needle sharp teeth grabbing her skin and chewing on her.

Verdi was fascinated when we took her bowling. It took a few minutes to explain that she couldn’t chase the balls. She did however enjoy a good walk on the beach afterwards.

Verdi met our handsome Barney at our Guide Dog Coffee Morning at St Albans, Liscard in February. Barney was so excited to see me and he remembered the church hall, guiding Sue his owner, straight in. It might not look like it in this photo but they got on really well and had a good play.

This is from a first-time Guide Dog Owner, Ai Sha, to her Guide Dog, Pearl. I thought it was lovely and wanted to share it. People ask me how can I let the pups go, after having them for a year, and I have to admit it is always heart breaking. However, stories like this make the agony of giving the pups back, so worthwhile.

Dear Pearl, 12 months ago, you bounded through my front door like a whirlwind, crashing into my life and heart! Your cheeky yet charming personality won me over instantly and within an hour I was at your service, giving you tummy tickles and wondering whether you would like me and whether I had made the right decision and worrying about whether we would bond!

Over the next few months, we both had a lot to learn about trust and teamwork, Play and boundaries, but I definitely did not have to learn to love you! I was sceptical about putting my faith in your paws but I should never have doubted your confidence, intelligence, your problem-solving feisty nature, never turning away from a new challenge or opportunity, Embracing life and throwing yourself into the next adventure!
You are a princess, a diva, you can frustrate me to tears and can stand your ground and be stubborn seemingly just for the sake of it; I no longer wear heels and my handbags are full of poo bags and smell of biscuits; I have to set my alarm 30 minutes earlier to make sure that you are fed and spent and bad weather is no longer an excuse not to go out; none of the above matters and I wouldn't change a thing! You inspired my love immediately, gained my trust, have taught me about patience, tolerance and forgiveness, made me laugh out loud on a daily basis; you have known the right moments to come and plonk yourself on my lap for a cuddle to make me smile; you have flawlessly kept me safe; you have amazed me with your satnav memory and found the way when I have got us lost; you have accompanied me on several weekends away to unfamiliar destinations and guided paw perfectly; you have travelled with me on buses, trains, trams, taxis and the London underground and been entirely unfazed; your shameless flirting has landed us in first class on trains and instigated weird and wonderful conversations with strangers whose feet you have sprawled out on the tram; you have made me more able to be open about and accept my disability; you are my cheeky chancer, my mud monster, my guiding star!

We have had an incredible journey together and I can literally trust you with my eyes closed! Here's to another wonderful year ahead.

Thank you to everyone who has made our partnership possible and I appreciate all GD staff and volunteers for doing the wonderful work you continue to do to shape the futures of many more life changers! 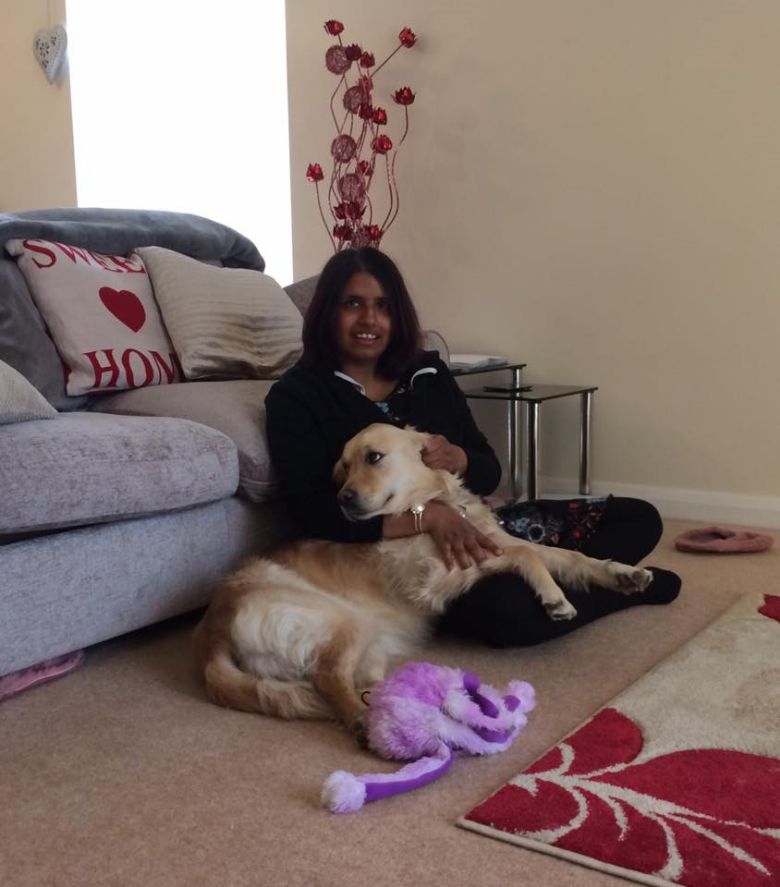 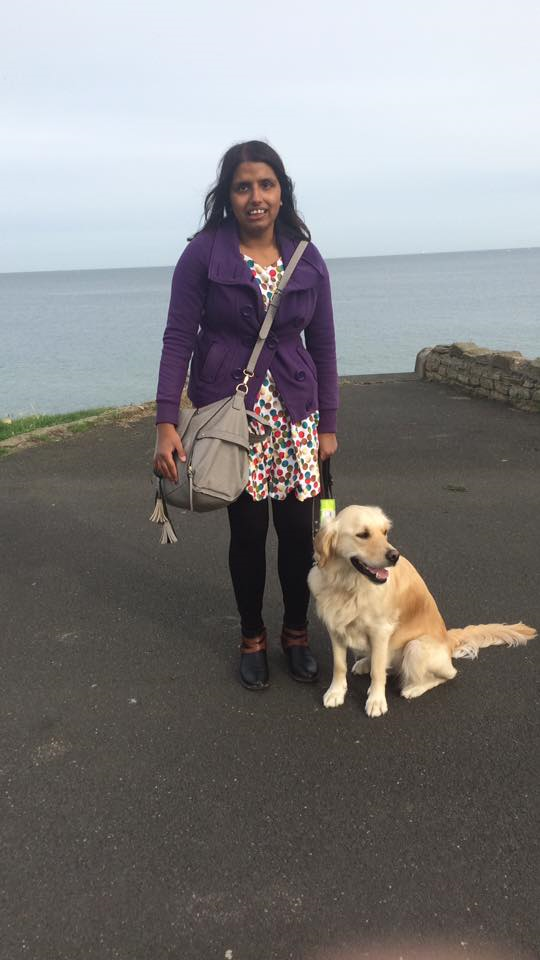