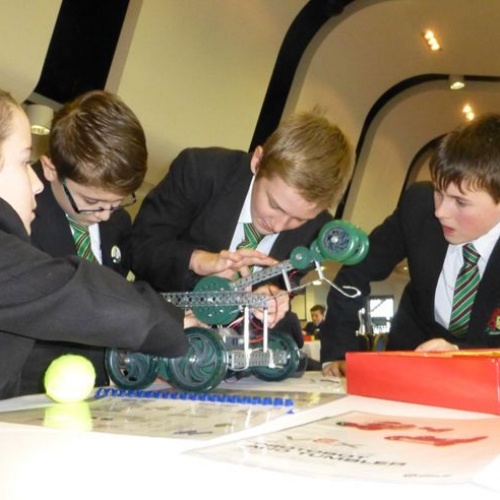 After the triumphant success of Mosslands STEM team  in  the open heats of the Merseystem VEX robotic's challenge, they advanced to a place  in  the Greater Merseyside  final held at Aintree race course.

After the triumphant success of Mosslands STEM team  in  the open heats of the Merseystem VEX robotic s challenge, they advanced to a place  in  the Greater Merseyside  final held at Aintree race course.

The day of the final started alarmingly with the late news that chief build mechanic  Alfie Egan  could not escape the clutches of his sick bed  (this on his birthday too) and so would be  unable to turn out for the team,   a worthy substitute  was  required!   After  frantic early morning calls Matthew Fitspatrick was  promoted to the big league and became the 4th member of the robotics  team  The team led by Matthew Noyce, supported by primary driver Finley Groom and second mechanic  Bradley Guy  and with invaluable  assistance from the parent  possie  set off to Liverpool for their challenge.

At Aintree even though the team had less build time  than previous competitions,  once in the zone, working as a stream lined team,  displaying excellent time management skills and problem solving  they produced “ One Arm Bandit” a robot  ready for “battle”.

After the league stages of the competiton  Mosslands remained undefeated, with easy victories over St Mary’s and St Margarets  and then went onto meet Rainford in the semi – finals.    Mosslands took an early lead but  some how time slowed down and Mosslands superiority momentarily left them and after a tense and thrilling 3 minutes – it was all over , they had lost 9 -8.    Fortunately the loss  was made easier to swallow with the awarding of a  £750 VEX robots kit to the team  and being the best VEX robotics team on the Wirral is not a bad title  to take home.

The request for a “stewards inquiry” was a possibility but at Aintree it’s understandable to fall at the last hurdle and so next next year it’s time to get back in the saddle and show more resilience and resourcefulness!

We had a brilliant insight into the STEM programme, seeing how motivated the boys were by being given a task to plan and execute together. The team worked so well together even though one member had only been drafted in that morning to replace Alfie who was ill. They were rewarded for their efforts by bringing a huge box of robot bits back to school to prepare for the next challenge at MerseySTEM Big Bang in Liverpool in July. It was easy to see how the skills they were using could be transferred to any problem solving task and eventually into the engineering world they could end up working in.

Finally a huge thank you to Mr Lam and the school STEM team for having the vision and determination to get the boys involved in as many such activities as they can.