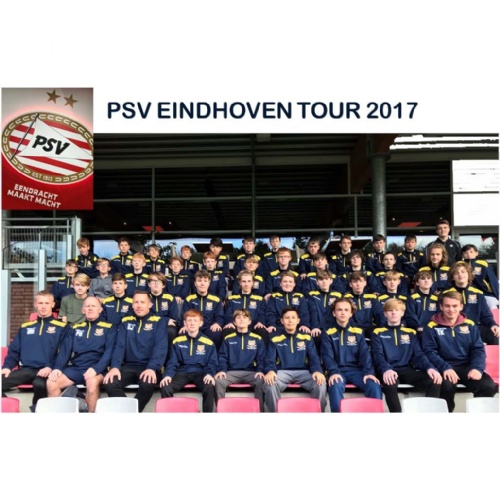 We took 40 students over half term to Eindhoven in Holland for what was a truly inspirational and memorable football tour. The idea was that they would train and play as a professional football team for a week.

They had chance to sample the first rate grass roots football facilities that Holland provide their young players in fixtures with local teams. We played 6 games. Won 3, lost 1 and drew 2 against very friendly and high ability local hosts. They enjoyed the calm and relaxed ethos of Dutch football.

On top of this they got 4 training sessions with PSV Eindhoven football coaches at their amazing first team training complex in the beautiful leafy facility just outside the city centre.

They also watched a PSV Eindhoven fixture with 35,000 other fans as they beat Hercules 3-0 at the Phillips Stadion, Followed by an access all areas stadium tour the day after.

We also managed to cram in an intra team tournament (where y10 just beat y9 by one goal) and lots of time to shop and enjoy the Dutch culture of Eindhoven city centre.

The boys were a credit to the school and worked tirelessly for their time there. They gave the staff no problems at all and the tour company wrote a letter of thanks to Mr Whitley to praise our boys effort and manners with all they came into contact with.

There are hundreds of photos that all students can access at school. Mr Reed will do a thank you assembly with the boys involved and show them how to access them.

Lots of details and pictures are on twitter (@mosslandspe)