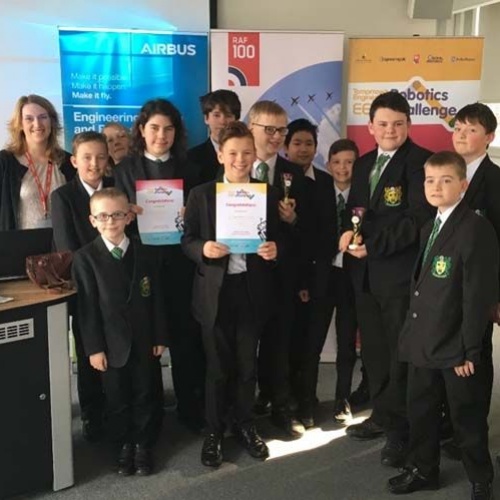 It has been rumoured that AA is a frequent visitor to school and in all honesty, some days, it is hard to get going without their support.  Well, that was the case on 28th February when, with a mini bus filled to the gunnels with Member of Mosslands “Brick Head”  Mindstorm Lego Robotics Team, the school mini bus failed to compete against the arctic temperatures and suffered a dead battery!

Well in short, after the timely intervention of the AA (Automobile Association) Team Brick Heads did get to compete in the Merseyside Regional Final of The Tomorrow’s Engineers EEP Robotics Challenge at Chester University and in all honesty, the day did get off to a slow start but finished on a much faster one!

Without having a chance to practice, we went straight into the speed challenge, to find the fastest robot over a 4 metre track; we won with a time of 2.2 seconds.

We struggled a bit with our big presentation and faced some tricky questions from the judges who grilled us about our design and build. Next came the challenge, all 13 of us here we had to communicate ideas from behind screens to each other. It was a bit odd but we got some great feedback at the end.  Our best team members were the media team Rowan Smith, Tom Drew and Joel Teasdale who were proper good!

When it got to the awards ceremony, the feeling of winning the whole thing and going through to the final (National Finals at the NEC Birmingham) made me feel ecstatic. Everyone should try to get involved in these types of opportunities. If you don’t try it, you may regret it in the future and it gives you more to speak about in job interviews. It was extremely enjoyable event which everyone should try.

On this trip, I learnt a lot about team work, how to speak in front of people. As well as this, I learnt how to build more with LEGO. We had to be organised and use our own initiative to solve problems. In addition, we improved our resilience (core value at Mosslands), as we never gave up even it was difficult.

The STE@M trip was amazing. It was so much fun; there were lots of challenges that we had to prepare for and one mystery challenge!   The first Challenge was the Speed Challenge. Well as the name suggested it was a timed race and guess what, we WON!
Jacob Year 7 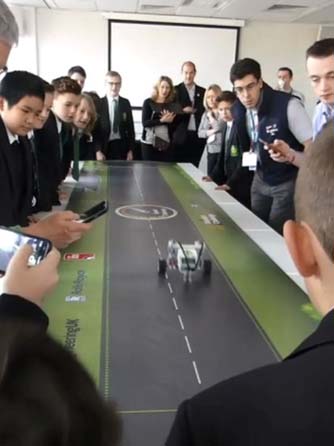