On January 31st 2019, me and a group of friends went on a journey full of independence, life skills and excitement. It was if we were exploring the unknown, accomplishing things we would never think we could overcome.

The icy morning replicated my emotions. A mysterious breeze swept over me, was it the pressure?  As I stepped out of the bus, and entered Wirral Met College, a wave of nerves hit me. The glorious artwork hung around showing off the owners work in all of its beauty, I felt as if they were great giants standing over me. I followed the rest of the group into the arts and drama room, suddenly feeling as if I was out of my league. Was I?  I sat down in the auditorium and waited for the intro and explanation of the events that would follow today.

To start off the presentation Mr. Lam and another teacher were called out to the front of the audience and were told to solve a Rubik’s cube in about 60 seconds. Unsurprisingly, neither prevailed. Then, putting them to shame, a video of a robot, with a set of algorithms, completed the Rubik’s cube in 10 seconds. Although amusing, it made me think if they were capable of this what else were they capable of. I put aside that thought for the moment and listened intently to the instructions I was being given.

After this, we were led into a room full of screws, cogs and robotic parts. How were we meant to create a robot out of this? Determination pushed me onwards and I got on to the task set. Me and Keane began working on the base of the robot whilst Harvey and Corey made the arm. Within 15 – 20 mins the base was complete and we started to make the wheels. All was well until disaster struck, I had misplaced screw. Due to this I had to dismantle the whole wheel and its support. Had my mistake caused us failure. Empowered by my resilience, I resumed my work and tackled the problem. Amazingly, within a few minutes I had caught back up and it was ready to attach to the base. However, it wasn’t going to be that simple… 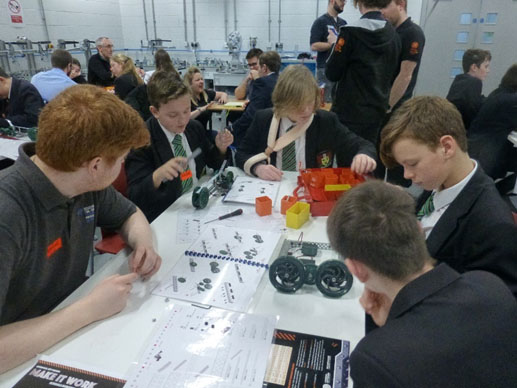 We had screwed in the wheels in place and were ready to move onto the next when, once again disaster struck. I had put the wheels upside down. This time though I did not let my head drop. We had fixed it quickly and after that everything ran smoothly. Well more or less.

After a lunch break, we started to put the finishing touches on our robot. I was spellbound by our creation. It truly captured the essence of our school and our teamwork. Whilst we waiting for the arena to be set up Keane (our driver) had a practise. After a few tries of driving the robot he got into the stride of things and was quick, efficient and calm.

Before we knew it was time. My pulse began to quicken and nerves started to rise all our hard work and hours of building led to this moment. Our first game was against our most feared competitors at the time Caldy Grammar school for boys. Once the referee was in place and the timers were ready the loud whistle echoed through the room and the teams began eagerly gathering tennis balls.

The objective was to return the tennis balls to your goal. Each tennis ball was worth 1 point and the pink which appeared once in a game was worth 2.

Keane had gotten a great start netting 2 balls almost instantly. It wasn’t over yet though Caldy had a pink ball in their grasp and was scored just as Keane had scored one for us. My palms began to sweat they were closing in! With great engineering Keane was able to score another 2 whilst Caldy only could get 1. Final score Mosslands 5-3 Caldy. Triumph filled our faces as we sat back down waiting for the next game. Tension rose and rose while when our second game came. We made our way back down to the arena and the and the adrenaline and anxiety kicked in once again. Unbelievably though Keane put in 7 and feeling bad for the other team’s robot that was malfunctioning in the corner put in one for them. Final score 7-1 Mosslands.

We were all realising how close we were coming to winning this we were in the semi Finals! Astonishingly, we were playing Mosslands B team in the Semi’s. It was equal the whole way through until the speed of Keane won in. The bittersweet semi-final ended in another victory! Final score 7-5 Mosslands A team.

The final! We had been dreaming of this since the start of the day and our dream was finally becoming a reality. Birkenhead Girls vs Mosslands. Drenched in sweat my belief stayed strong. For the last time the deafening whistle blew, Bikenhead girls had a good start in the 3 minute-long game scoring the pink and two others. We were on the catchup though we had scored 3 and about to score a 4th. We were matching goal for goal until all the balls had gone and the score was 7-6! The end? How could we win? As if the odds were in our favour a pink tennis ball bounced into the court. Both machines leapt for it with 10 seconds left on the clock it was surely impossible to win. Then Keane grabbed the ball and made a run for it. 4- Its surely to far. 3- Just a little faster. By 2 my ragged voice was aching with fatigue. Just as the last second ended the pink ball dropped into our goal. WINNERS! We had won in the most dramatic style. Final score Mosslands 8-7 Birkenhead girls. Elation filled me as we left the College as victors!

In January a selection of our talented Year 8 students were invited to participate in the Wirral heat of the Liverpool City Region, Make it Work, Schools Robotics Challenge. This All About STEM event, held at Wirral Metropolitan College, showcased careers in engineering and gave  students an insight into the rapidly advancing field of robotics.

Competing against teams from other Wirral Schools, the boys were challenged to build robots from scratch. They pulled upon their resilience, communication and ability to work as a team to manufacture a working robot they could control remotely. The teams were supported in their build by apprentices from the event sponsor, Teledyne, and our boys were delighted to discover that one of their mentors, Tom Richardson, was an old boy of Mosslands  and were intrigued by his job at Teledyne. 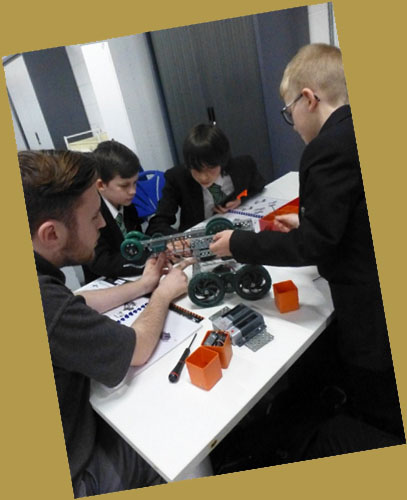 After a successful build, their creations were put to the test in the battle arena. Each team would pilot their robots first in the group stages of the competition, with only the top teams progressing to the semi finals. The two Mosslands teams rose to the top during their heats and met each other in the semi final – just one team could make it through! The final, Mosslands A v Birkenhead High School Academy was the highest scoring match of the day and was packed with action right up to the final whistle. Nevertheless the Mosslands boys Keane, Corey, Alfie and Harvey  remained undefeated and have now been invited to the Grand final being held at Liverpool Echo Arena & Convention Centre. There they will compete against the winners from all the other heats to have the chance to be crowned the Make it Work LCR Robot Challenge Champions 2018/19!

Well done, boys! You deserve your success and we wish you the best of luck in the Grand final. 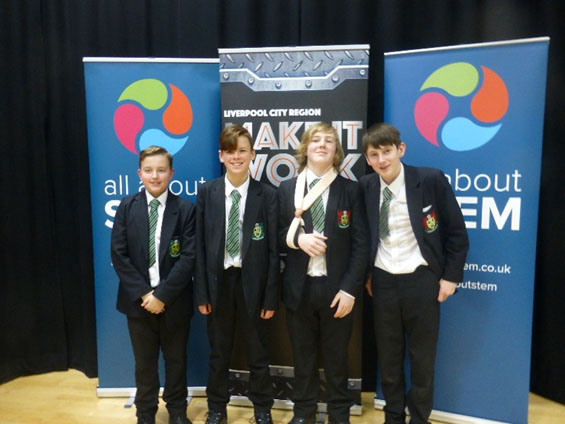 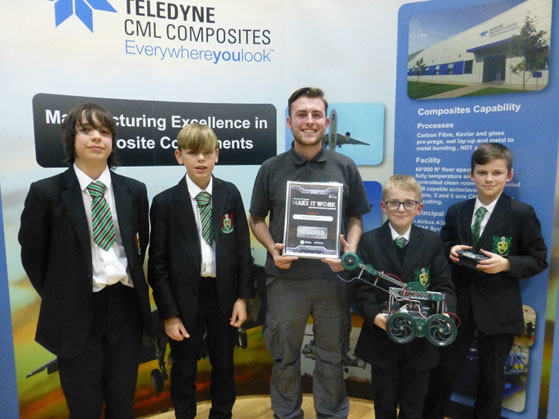